Day two at New York Comic Con saw a lot of first looks. Here’s a recap of the day’s major events and reveals. (Warning it was “Marvel Day” so there’s going to be more Marvel announcements in here than usual.)

— One of the most anticipated panels of the day was Marvel’s Agents of SHIELD. Though ratings for the second season of the show have dropped off, fans stood in line for hours to get into the sold out main stage. In addition to screening next week’s episode (strange move considering you want people to tune in) and then followed that up with a sneak peek of Agent Carter.

Now granted Hayley Atwell who plays the title character has appeared in an Agents of SHIELD episode earlier this season, but this was our first look at Atwell in her standalone spinoff.

The scene featured Atwell and Dominic Cooper as Howard Stark and began with a vintage car being driven up to a pier. Carter and Stark get out as Howard talks about important documents containing a formula to create a powerful explosive that have gone missing. He gets into a small motorboat talking about how there are only two fences that deal with such things. He goes off on the boat to search for them after telling his butler and chauffer Jarvis to drive Agent Carter home. Carter goes back to car and talks a bit with Jarvis. He suggests taking Carter home to which she replies, “This is where I get to work.” We then get to see a little bit of Atwell in action, fighting an unknown attacker.

Agent Carter will begin airing some time in 2015, possibly right around when season two of SHIELD is wrapping up. 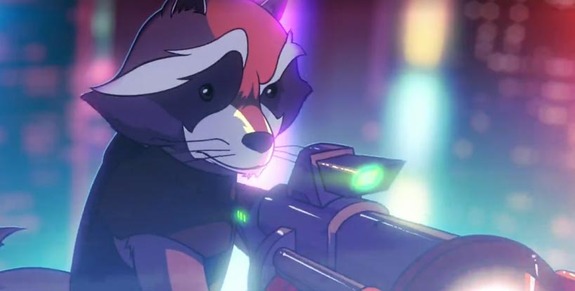 — Keeping with the Marvel theme, the company announced that Disney will be whoring out their Guardians of the Galaxy title with an animated series in 2015. The show will air on Disney XD in 2015 but attendees got a sneak peek at test footage of Rocket Raccoon and Star-Lord in action. Check it out here.

— Marvel is also planning on spinning off an alternative universe Spider-Woman that is Gwen Stacy in a solo title next year. The story will spin out of the recent alternate reality story seen in Edge of Spider-Verse #2.

— Want even more Marvel? Here’s a four-hour stream of Marvel live from today:

— Anime distributor Crunchyroll announced this morning that they have added Cased Closed aka Detective Conan to their library. The long-running mystery anime will be available in the United States and Canada as it airs this fall. Crunchyroll also announced that it would stream fall animes Bonjour Sweetlove Patisserie and the live-action series Ultraman Max. The entire Ultraman Max series will begin streaming on October 14.

— Gamers who pre-order Resident Evil Revelations 2 on Playstation 3 or Playstation 4 will net them an extra bonus mode for free, producer Michiteru Okabe announced at this panel today. The game will be available to pre-order on PS4 on October 14 and for PS3 later this month. Pre-orders on these consoles will net the Raid Mode Throwback Pack for free, which features stages from previous, more recent Resident Evil titles that will be playable in Raid Mode.

That’s all the major events from Day Two. Saturday is going to be a busy one with a WETA panel in the morning (they do the special effects for The Hobbit among other movies), a Sailor Moon panel, BOOM! Studios will offer up previews, Marvel will present a Death of Wolverine panel, Funimation should have some announcements at their panel, Patrick Stewart will be spotlighted on the Main Stage, DC will celebrate Batman’s 75th Anniversary and all of this will be capped in the afternoon with The Walking Dead panel on the Main Stage. The full Saturday schedule can be viewed here.

And if you missed the Day One recap, read it here as well as the Disney Main Stage presentation here. Two days down, two to go.