Another year is coming to a close and it’s time to start posting up end-of-the-year content. But before I unleash my obligatory Top Ten films list, it’s time to catch up on a few polls that were published earlier this year.

A few months ago, I posted a Favorite Japanese Actress 2014 poll on Ranker and it’s time to unveil the results. 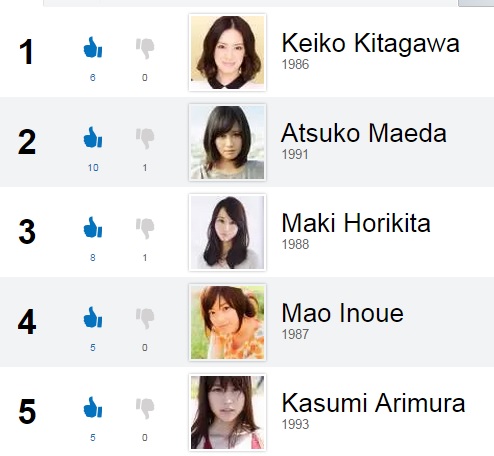 There were many famous actresses who placed somewhere in the middle of the pack. Aya Ueto tied for sixth with Satomi Ishihara while Mirai Shida placed eigth. Adachi Rika, Saki Aibu and Haruka Ayase tied for ninth. Yui Aragaki, Haruna Kawaguchi and Kyoko Hasegawa rounded out the bottom of the top ten, tied for tenth.

Other young actresses didn’t fare quite as well. Ayame Goriki placed 21st while Kiko Mizuhara ranked in at 23rd. Mizuhara is one of the lead actors in the upcoming highly anticipated blockbuster adaptation of Attack on Titan.

It’s time to put this poll to rest (in fact, I’ve deactivated it) but a new list has been put together: Favorite Japanese Actresses. You can vote on that list from now throughout 2015. I’ll post up the results this time next year.

And one more time, your favorite actress of 2014, Kitagawa Keiko: