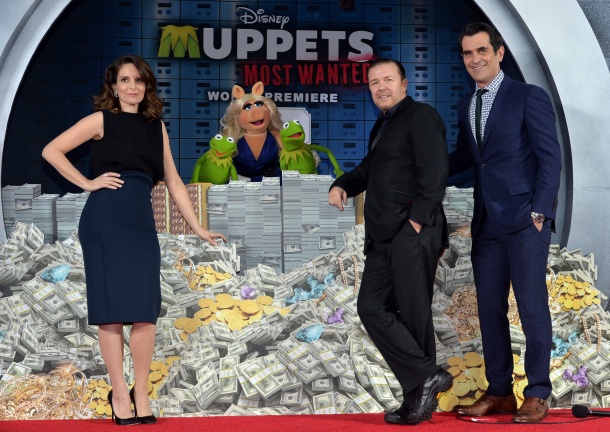 So it’s a good thing that Muppets Most Wanted director James Bobin (he also directed the 2011 Muppets movie) decided to stuff this latest sequel opening in theaters this weekend with a number of famous faces.

Now this goes without saying, but if you are one who hates spoilers, you’re going to want to turn away now and head back to the home page. Here, I’ll even leave this link right here so all you have to do it click it.

For those who want a celebrity guide to this latest Muppets movie, continue to scroll down.

Lady Gaga and Tony Bennett appear side by side during the opening song performance. Also appearing in the opening sequence is Rob Corddry as First Assistant Director.

Jermaine Clement appears as the GULAG Prison King with Ray Liotta as Big Papa and Danny Trejo as himself. WWE wrestler Dyaln “Hornswoggle” Postl joins them as “Prisoner One.” Technically, these four aren’t cameos as they appear throughout the film in a supporting role.

Character actor Aleksandar Mikic plays one of the GULAG guards.

James McAvoy appears for a few seconds as a UPS Delivery Man while Til Schweiger appears as a German police officer.

Celine Dion has an extended appearance as Miss Piggy’s “Piggy Fairy Godmother” and emotes her duet as only Celine Dion can.

Sean Combs appears as himself alongside Pepe the King Prawn in a train sequence.

Christoph Waltz and Saoirse Ronan appear as themselves as part of separate Muppets World Tour performances.

A trio of actors play “Berliners” in the film. They are Kenneth Collard, Fleur Poad and William Brand.  Miranda Richardson plays “Berliner in the Window.”

Pirates of the Caribbean actor Mackenzie Crook (he played Ragetti) and Toby Jones play a couple of museum guards who, well, don’t do a very good job guarding the museum.

Another Pirates actor appearing the film is Tom Hollander as a theater manager. Hollander played Lord Cutler Beckett in At World’s End.

Spanish soccer announcer Andres Cantor is heard in the role of, what else, an announcer.

A highlight for many guys watching this movie will be Salma Hayek in a skin tight red leotard as she joins Gonzo in the Running of the Bulls.

Tom Hiddleston has a great little cameo as imprisoned magician The Great Escapo.

Usher Raymond has by far the corniest cameo in the movie as, ugh, an usher. Where’s Waldorf and Statler when you need them?

Frank Langella appears as a Beefeater Vicar (a priest for all the Americans reading this) while Zach Galifianakis appears once again as Hobo Joe.

Chloe Grace Moretz appears at the beginning of the third act (quite suddenly and awkwardly I might add) as a newspaper girl while Disney Channel actor Ross Lynch appears as a florist.

Easily my favorite cameo in this movie is Stanley Tucci as Ivan the Guard. His exchange with Kermit is hilarious.

Finally, there’s the maximum security prisoner who remains concealed for the majority of the movie. I’m not going to reveal him here because, unlike these other cameos, he’s specifically hidden until the very end as a final reveal.