Welcome to the first installment of the Friday Five. Originally, I thought of perhaps posting this as a podcast (and may still venture down that route) but for now, we’ll proceed in old fashioned blog format.

So what is the Friday Five? In short, it’s the five biggest stories for the entertainment world each week. There’s a lot of stuff that get thrown out into the void, from random casting news to new trailers and clips. What I do is filter through them to bring you the five most important and impactful events from each week.

OK, enough exposition. Let’s get into the five biggest bits of news from this week:

Joan Rivers Passes at the Age of 81 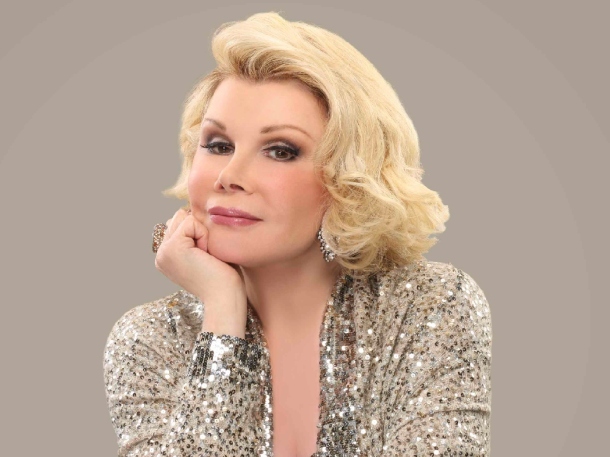 Oddly enough I was going to start this column during the week that saw Robin Williams take his life. Instead here we are a couple weeks removed with another comedy icon/legend passing on.

I was never a big Joan Rivers fan, but it’s hard not to see the impact she had on both stand-up comedy as well as red carpet reporting. The tart-tongued comedienne helped paved the way for the likes of Sarah Silverman, Kathy Griffin and others. Later in her career, she transitioned to become part of E! TV’s “fashion police” which critiqued celebrity red carpet garb with acidic and biting humor.

Rivers was 81 days after complications arose from throat surgery. She had been kept in a medically induced coma and was kept sedated while family members decided what to do. There was significant concern that there might be motor skill issues if she was brought out of her coma.

In the hours since her passing, there have been numerous “Joan Rivers’ __ Quotes” posted online and while it’s nice to look back on her pointed one-liners, a lot of those posts miss out on the person, the mother, the mentor and friend she was to many in the entertainment industry. Trailblazers like Rivers are a rarity and losing her this week is a loss that cannot be replaced so readily.

Let’s liven things up a bit with the first trailer from Horrible Bosses 2! The sequel finds Jason Bateman, Jason Sudeikis and Charlie Day helping Chris Pine dispense of his boss (who also happens to be his father). Familiar foes from the first film also appear, namely Jennifer Aniston and Kevin Spacey. Horrible Bosses 2 arrives in theaters November 26. Here’s the new poster, with the trailer below it:

Amidst a hacking scandal that saw personal nude pictures of her land online, Jennifer Lawrence has set a Guinness Record (one having nothing to do with the nudie pics). On Friday, the Guinness Book of World Records announced that Lawrence had become the highest grossing action movie heroine with her starring role as Katniss Everdeen in the first two Hunger Games movies. The two films have grossed $1.5 billion worldwide. The final book, Mockingjay has been split into two parts, the first of which will arrive in theaters November 21.

Guinness also announced that Beyonce set the record for fastest selling iTunes album. Her surprise album sold 828,773 copies worldwide during the first three days of availability last December. Miley Cyrus became the most-searched pop star on the Internet, Katy Perry became the most popular Twitter user with 56 million followers and Vin Diesel set his own personal record after posting a picture of himself with Paul Walker after Walker’s tragic and fatal crash.

DC is quietly piecing together their massive multiple movie universe by adding another piece to the puzzle this week. The Rock (does he still go by that name) aka Dwayne Johnson was announced as villain Black Adam on Wednesday. Black Adam would be the villain in DC’s Shazam. The titular character features similar powers as his nemsis. No further details, including director, co-stars or even which one of DC’s 11 upcoming release dates the film will occupy. However, New Line president Toby Emmerich told Entertainment Weekly that, “It feels to me that Shazam will have a tone unto itself. It’s a DC comic, but it’s not a Justice League character, and it’s not a Marvel comic. The tone and the feeling of the movie will be different from the other range of comic book movies.”

Meanwhile, CW is gearing up for its Flash TV series debuting on October 7. Dominic Purcell (Lincoln Burrows from Prison Break) has been cast as supervillain Heat Wave. Speaking of Prison Break, Purcell will reunite with his former co-star Wentworth Miller in the tenth episode when Miller guest stars as Captain Cold.

Finally, Robert Downey Jr. threw his name onto the growing pile of people who want Scarlett Johansson’s Black Widow to have a solo movie within the Marvel Universe.  “It would be kind of more appropriate for a character that already was like a Black Widow (to lead a movie). It just seems like whatever Scarlett does people want to go see it…The funny thing is honestly at this point everyone deserves a franchise. I think Jeremy Renner is – when folks see the Avengers: Age of Ultron he’s just a rockstar, a badass. And Ruffalo is pumped. He does great (work). I’d like to hear them talk even more seriously about a Hulk franchise, because that’s been one of the toughest ones to get right. But I’m sure that my parent company is feeling expansive and bold after the summer they’ve had.”

After grossing nearly $1.3 billion worldwide, it was only a matter of time before Disney brought back the characters of Frozen and put them into an animated short. Titled Frozen Fever, the short is slated to be attached to a Spring 2015 Disney release, lining it up perfectly with their live-action Cinderella movie starring Lily James as the title character. In Frozen Fever, it’s Anna’s birthday and Elsa and Kristoff are determined to give her the best celebration ever, but Elsa’s icy powers may put more than just the party at risk.

So there you have it. Those are the five biggest, most important happenings from the entertainment world this week. For more daily entertainment news, follow along on Twitter at @DerrickDeane (just click that and it’ll take you to my page). Have a great weekend everyone!