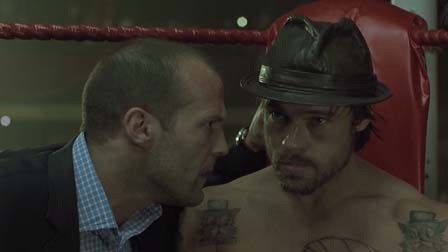 So the theme of the evening seems to be hacking one’s arm off. First, James Franco in 127 Hours during a special screening at Landmark Theaters in the rush hour traffic hell that is West L.A. and then today’s Day 91 movie, Snatch, in which Benicio del Toro probably would’ve wanted to think twice about handcuffing a briefcase containing a diamond the size of a fist to his wrist. Hey, that last part ryhmed!

Honestly, I didn’t really like this movie. In fact, in general, I’m not a big fan of Guy Ritchie. The only reason I bothered watching this movie was for Jason Statham. And Brad Pitt’s mumbling bare-boxing champion character. I honestly got bored with the story and the incessant F-bombs about halfway through.

He's about to have a REALLY bad five days.

So back to 127 Hours instead! Great movie. Franco and Boyle are sure to get Oscar nominations. And as for the arm cutting scene, yes, it is graphic, but not as graphic as people are making it out to be. Of course, I prepared myself for something truly gory and nauseating and in the beginning I was a bit weary of where it was going. On the squeamish scale, it’s about a 5 or 6. Higher if you don’t like the sight of blood. Don’t worry, there’s not gushing blood. And it’s nothing like the should-have-been-rated-X Saw 3D. All in all, good movie. It’ll be in the Top 10 for Best Picture next spring. You can read the full Q&A Session with Boyle here.