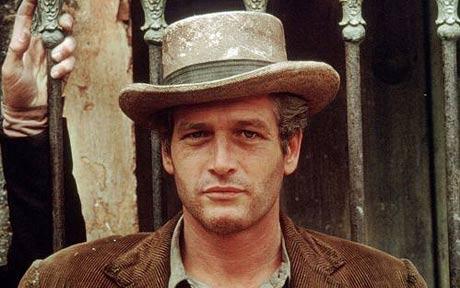 Paul Newman in "Butch Cassidy and the Sundance Kid."

Well, I had intended on watching True Grit seeing as how it’s the movie where John Wayne won his one and only Acacdemy Award for acting and is being re-made by the Coen Bros. into what looks to be an awesome movie. But alas, Netflix failed me, classifying the movie as a “short wait” so I decided to check out the other Western from this year. No not The Wild Bunch. I’m talking about Butch Cassidy and the Sundance Kid! One of my favorite scripts of all time! to the point where it totally messed up how I wrote movies for a good three or four years!

Since this is an (almost) timeless classic, it seems somewhat futile to waste your time by giving a recap on everything that happens in the movie. I doubt there’s anything I could say about this movie that hasn’t been said exactly a bajillion times since it first came out. So instead, how about we pit these three movies against one another in Western shoot-out. And we’ll throw Midnight Cowboy in here as well, not because it’s a Western, but because, duh, it has “cowboy” in the title.

So in Cowboy Dustin Hoffman and Jon Voigt play a naive male prostitue and his sickly friend trying to survive the streets of New York. But out here in the Wild West, New York street smarts don’t get you very far, because, well, there’s no streets! And plus John Wayne’s got wicked aim with his shotgun. Midnight Cowboys take a dirt nap.

Regardless of how skilled Butch and Sundance are with robbing trains and blowing up safes with dynamite, they’re no match for the gun skills of Wayne, not to mention the Wild Bunch! Any stick that’s heaved at them gets blown up mid-air. Keep in mind Butch and Sundance had to run away (all the way to freakin’ Bolivia!) from an Indian with crazy good tracking skills! In the long-run, regardless of how good Sundance’s shot is, these good ole boys bite the dust.

Which brings up down to the final showdown – John Wayne and Glen Campbell from True Grit vs. William Holden and Ernest Borgnine from Wild Bunch. Hmmmm… I really don’t know who would win this show-down. Hell, maybe these guys all get drunk and forget there’s even a showdown to be had! One thing is for certain though, I sure wish I could’ve watched True Grit today.