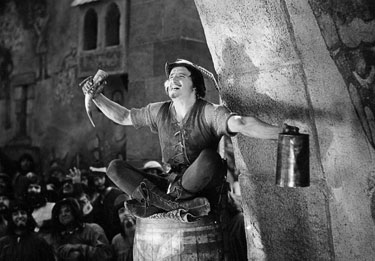 I should’ve have known when the following message appeared before I had even pressed play to watch Robin Hood that things were going to be a bit odd. The message said, “If you are not German, press play.” And so, after quickly deducing that I had not a drop of German blood in me, I pressed play and the journey began.

Let me say first that this movie is LONG! Almost two and a half hours long. The YouTube channel that I watched this on muted the original soundtrack and replaced it with a customized playlist. Which worked in some parts and in other parts not so much. In the final fight sequence, Holy Pain’s “Last Sigh,” gave an edge of bad-ass-ness to the showdown, whereas the instrumental hip hop track by Son3 called, “Rapchill,” seemed a bit goofy. And yes, the title of each new song appears on the screen as you’re watching the movie.

"Robin Hood" claims his crown from the fair maiden, even though he's afraid of women.

As for the movie itself, eh, I could take it or leave it. I did find it interesting that Douglas Fairbanks played both the original Zorro and Robin Hood (Antonio Banderas and Russell Crowe, eat your heart out). But in the end the combination of this crazy playlist and the movie’s length dampened my enthusiasm.