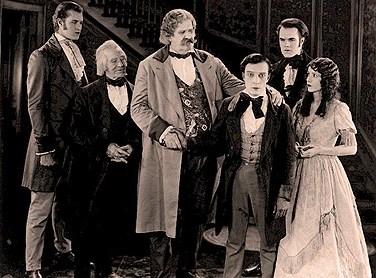 Buster Keaton in “Our Hospitality”

I’m not gonna kid you, I’ve hit a wall. Even before I sat down to ingest the hour-long dramedy Our Hospitality starring Buster Keaton, I was dreading it. So my thoughts will be brief.

Our Hospitality focuses on the long-running family feud between the Canfield and McKay families. Buster Keaton travels down from New York to claim his father’s house and walks right into the middle of the feud. The movie concludes with an un-ending sequence that made me want to go whitewater rafting. That been said, I’ve never been a fan of Buster Keaton’s. I respect his work and all but I just can’t get into his films. Here’s hoping I can clear the wall tomorrow before I sit down to watch the two-hour movie, Greed. Hopefully it’s not the four-hour restored version from 1999. Ugh.