Donald Glover is having quite a moment lately. From his Emmy-winning comedy series Atlanta to the social media buzz-worthy music video for This Is America, the 34-year-old star is front and center in the upcoming Solo: A Star Wars Story portraying the iconic Lando Calrissian.

In an interview with Variety, Glover talks about taking on the role as well as the film’s well-publicized issues in the director’s seat.

Have you talked to Billy Dee Williams since he saw the movie?
Yeah, he texted me.

What did he think?
He said, “Good job.” I was really surprised. I didn’t ask for it. If he hated it, I’d just rather not know.

He didn’t have much advice for you at the beginning, right? Just “Be Lando.”
Just be charming. Which was perfect. It really made it super simplified. With playing a character that’s already established, there’s a fear of overthinking and comparing yourself. To be able to just go, “Be charming,” it’s really helpful, actually. 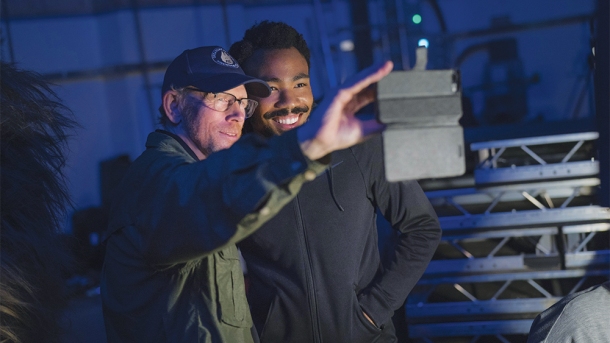 Was the transition to a different director difficult for you?
It was unexpected but not difficult. We got three great directors for the price of one, and I got to see the difference. I’ve never been in a movie this big. I’ve gotten to work with big directors, you know, Ridley Scott. But getting to see how it’s done from two different styles was super unique. On the same movie? Never happens. So I just soaked that up. I was just like, “I know this is not ideal, but now there’s a control in this experiment. This probably won’t ever happen to you again, so pay attention.” It was weirdly beneficial — not to belittle the seriousness of the situation. I think there was honestly a miscommunication in the artistic vision.

You can read the rest of the interview on Variety.

Solo: A Star Wars Story lands in theaters May 25 with early screenings on May 24. Buy tickets here.