Tucker and Dale try to figure out why all them college kids is killin' themselves.

I heard a lot about this movie during it’s very limited and brief theater run. The trailers and clips looked hilarious and so I expected this to be a laugh-out-loud horror comedy. Well, it’s not quite that, but it’s still enjoyable. A smart and often funny twist on the horror comedy genre with solid performances from the leads – Tyler Labine, Alan Tudyk and the lovely Katrina Bowden.

I really wasn’t sure what I was getting into with this movie. The trailers and clips made it seem like it was going to be an indie version of Super 8 or a less shaky Cloverfield. For a movie titled Monsters, you don’t really see much of them. Rather, it’s all about mood and atmosphere and talking about how evil these creatures are. Aside from the one truck attack sequence and the final open-ended bit at the gas station, you could easily snooze your way through this film.

Paula Patton and Laz Alonso debate about jumping over a broom.

Paula Patton stars in your run of the mill Prince and the Pauper romantic comedy whose storyline has been told a thousand times. That been said, the movie is pretty harmless and while there aren’t any really hilarious moments in it, Patton looks gorgeous and the supporting cast performs admirably. This is essentially what a good Tyler Perry movie might look like. I know the concept of a good T.P. movie is a bit of a stretch. 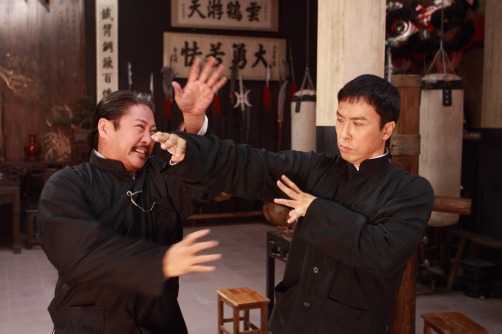 Donnie Yen returns for another round as the martial arts legend known as Ip Man. I actually liked this sequel better than the first movie (and honestly, how often can you say that). One of the main reasons is the appearance of Sammo Hung. The table and chairs sequence between he and Yen is just so fun to watch. Definitely seek this movie out. You don’t really need to know anything about the first film to enjoy this sequel.

BoredOutOfMyMindNoMorePlease. Angsty hipster dramedy. I made it halfway thru before tapping the eject button.

One thought on “What I Watched Vol. 9”