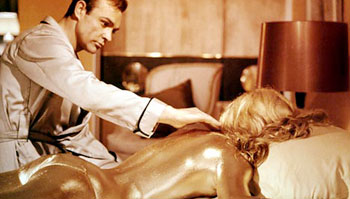 A scene from the beginning of "Goldfinger"

Wow, so many great movies for this year! I wanted to switch today since Tony Curtis died this morning, but unfortunately, there wasn’t anything under his filmography worth watching. Perhaps The Great Race tomorrow instead of Faster Pussy Cat! Kill! Kill! But I digress…

So, Goldfinger. You can’t fault me for having a sense of deja vu in watching this. Before I began this 100 day marathon, I ran through the library of the entire James Bond filmography and this movie was the one that came out on top. It has everything you could possibly want in a classic Bond movie. Granted my #2 movie would be my pick for best modern version of the Bond series. You can view the entire breakdown/rankings here.

But as I mentioned in the beginning, there’s such an abundance of great movies in this year, something that I have been hard-pressed to find since I’ve entered the 60’s. There’s, of course, Dr. Strangelove and Mary Poppins. And then the beginning of the Man-with-no-Name trilogy by Sergio Leone featuring Clint Eastwood in A Fistful of Dollars. And for the Beatle fans, there’s A Hard Day’s Night. If I had the time, I would have easily screened a double-feature for this year, but, unfortunately, work and life don’t permit such luxuries sometimes.

So tomorrow, it’ll either be Pussycat or Great Race but most definitely not The Sound of Music. I freakin’ hate that movie!