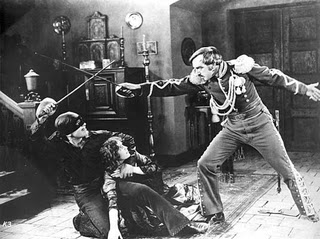 Douglas Fairbanks as the original Zorro, defender of the poor, slayer of corazones de las senoritas.

It’s so hot outside today, it makes the perfect excuse tostay inside and watch a movie. And while I was rather disappointed by Ten Shimoyama‘s ninja movie Shinobi, I did like today’s 100 Years movie, The Mask of Zorro. In short, he’s like the Spanish Robin Hood, defender of the weak and poor, crusader against the corrupt. And he spits mean poetry to the ladies.

I really liked the opening twenty minutes where the evil, self-centered Sgt. Gonzales is waiting for Zorro, played by thee Douglas Fairbanks Sr., to show himself. He proclaims that he will, “Carve Gonzales into his body,” if he ever meets Zorro. Finally, Zorro appears, there’s a decent five minute swordfight, then Zorro disappears.

He returns home, where his dad sets him up on a date with a poor family’s daughter. Zorro, reluctantly goes on the date, as his regular self – Don Diego – and tries to impress her with lame jokes and telling her how rich he is. When that doesn’t work, he dashes off and returns as Zorro and recites sonnets to the young woman.

Later that night, General Ramon returns from wherever General Roman went and asks the young woman for her hand in marriage. She doesn’t say no, but instead give him this look like, “Seriously? Marry you? You must be jokin’.” When things don’t go his way, General Roman decides that the obvious thing to do is to rape the young woman, until Zorro drops from the ceiling and carves a “Z” on Roman’s neck, all while missing his carotid artery.

Later on, Zorro laments that this whole movie could be put to an end, I mean, the corrupt government could be done away with if the cabarellos would just join his cause. But how to do that? Hmm.. How about have them dine in your basement and deliver a lofty speech of equality and righteousnes.

The young girl and her familia are jailed for treason and Zorro, along with his new caballero buddies go out for a good old fashioned pre-dawn jailbreak. He busts them out and returns to the village for a final showdown. There’s some stunts that would make Jackie Chan proud and a hacienda that would make Batman giggle with glee (OK, not really) and all works out in the end.

Thoroughly enjoyed this movie and, along with Shoulder Arms, is one of my favorites from this era of movies. Only six more years til dialogue graces our ears, although this movie does have some choice quotes, including my favorite – “Don’t do anything on an empty stomach, except eat.”