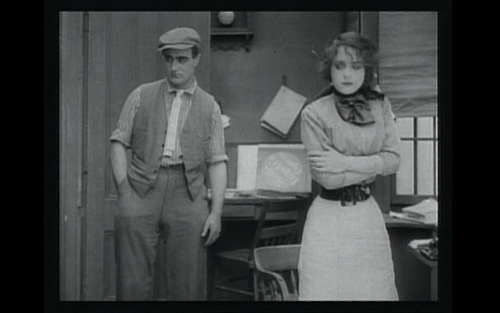 I’m grateful that today’s viewing is only a mere fifteen minutes. It’s been an emotionally fatiguing day with my dad back in the hospital. Since all I can really do now is wait, I’ve decided now was the opportune time to go forward with this 100 Days project.

That been said, I really liked this movie. There are plenty of films out now that wish they were even remotely well thought-out and executed like this short. D.W. Griffith, for those who are not familiar with the film icon, is considered one the original pioneers of American cinema. Though his vastly over-rated (in my opinion) 1915 breakout movie Birth of a Nation is perhaps his most well-known piece of work, Griffith spent the early 1900’s crafting camera techniques and narrative story-telling.

The Girl and Her Trust, while sounding like a Lifetime or Oxygen Channel soap opera, is actually about a supposedly widely admired (and by that I suppose they mean attractive) telegrapher who works in a railroad station. One day, a train arrives to deliver a large, heavy box that contains her money. A guy that she works with (who happens to steal a kiss from her when she offers him a sip of her soda) takes off to go get some food (I think) and leaves her all by her lonesome. Two tramps see that she is defenseless and through some wonderfully hilarious over-acting, they manage to break in and steal the trust box.

The movie then spends the next three minutes in a surprisingly well-shot train chase that ends with the tramps getting shot and the telegrapher babe being saved by the guy who stole a kiss from her. They hop on the front of the train and head back to the train station….. forgetting to put the trust box on the train. D’oh!

The background music also makes the movie seem really light-hearted and sweet. So far, of the three mega-old school movies I’ve watched, I’ve liked this one the best. Tomorrow, it’s The Bangville Police and the very first appearance of the Keystone Cops!!