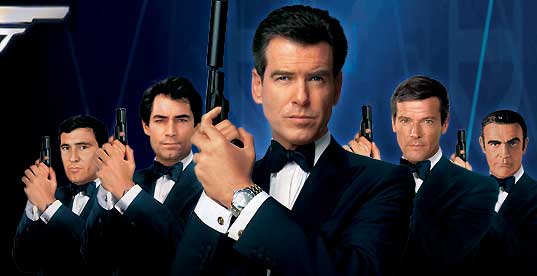 So now we enter the collection of Bond movies that weren’t all that bad, but at the same time, not all that great. The mediocre bunch, although once we get into the Top 10, it’s hard to call any of these movies mediocre. Anyway, here is #14-#6.

14. Casino Royale: Daniel Craig’s first outing as Bond. A promising start, even though I’m not crazy about the prequel-like flashback to how James became the spy we know. But the supporting cast (especially Eva Green) really save this movie and the story is engrossing enough to get thru.

13. Tomorrow Never Dies: If Sean Connery wasn’t the quintessential choice to play Bond, I could EASILY buy Pierce Brosnan as Bond. He has the swagger, the suaveness and the demeanor that Bond embodies. I really did like the overall story here of bad guy Jonathan Pryce looking to start another World War between China and the UK through misinformation distributed by his media outlets. There’s plenty of well-done action sequences involving Brosnan and Michelle Yeoh and Teri Hatcher does a great job as one of Bond’s jilted ex-hook ups… who hooks back up with him again anyway. *sigh* The ending did seem a bit rushed, but overall, a pretty good installment. 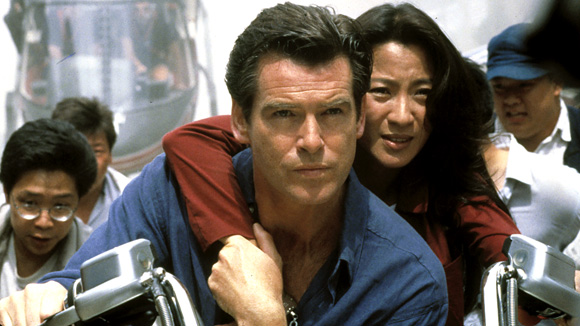 12. A View To A Kill : The primary reason this movie even rates this high is thanks to Christopher Walken who plays the villain role so perfectly. While the overall story drags a bit and the bad guy’s master plan is a bit absurd (flooding the San Andreas with underground water to cause a catastrophic earthquake that would destroy Silicon Valley), Walken’s sheer evilness pushed me root for Bond to finish him off for good… altho the showdown on top of the Golden Gate Bridge was a bit much.

11. GoldenEye: Ah, those first twenty minutes. If not for those first twenty minutes, this movie could have cracked the top ten. Granted there’s lots of action and we are left wondering just what the hell is going on, but almost to a point of annoyance. Plus the Russian sequences were really bleak-looking. However, once Bond got on the job though, things fell into place.

10. Die Another Day: If there were ever a movie where the Bond Girl was equally as good as Bond himself, this is the movie. Halle Berry does an excellent job as the CIA op who teams with James to bring down Icarus, a sort of death ray from above that shoots the collected energy of the sun onto a specific area of the planet. The opening scenes are a bit clunky but I still liked it and Berry’s backwards free-fall off that super high cliff was so cool for some reason. Brosnan and Berry. Awesome. And that Aston Martin “Vanish”!! I want!! 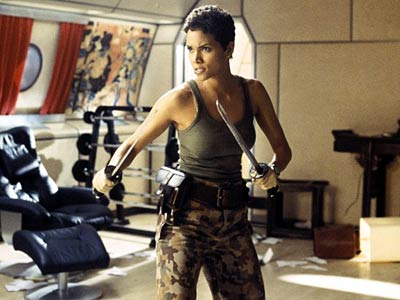 Halle Berry about to whoop some butt in Die Another Day

9. The Spy Who Loved Me: The fun part of this movie, aside from all the action, is waiting for that moment when Bond has to break the news to his latest bedmate that he killed her lover, because you know that moment is inevitable and when it happens, the movie is really going to take off.

8. For Your Eyes Only: Two words. Carol Bouquet. Sort of a European-looking version of Liv Tyler. Sure there’s bad guys and Bond kicking ass as usual, but, seriously. To quote Stan Lee, Carol Bouquet. ‘Nuff said.

7. Diamonds Are Forever: LOVED the Vegas car chase and the Amsterdamn boat chase is pretty good too. The crazy karate chicks at the end were a bit unneccessary but Bond finally getting even with Blowfeld makes up for that as does Jill St. John running around in a bikini for about half the movie. Haha

Ursula Andress as Honey Ryder and Sean Connery as 007 plotting their next move in Dr. No.

6. Dr. No : The very first Bond movie. I had it as my top movie for a while, partially out of the mere fact that it was the first movie that started this long-running franchise. But then when I really thought about it, there were other Bond movies that were better than this one. Don’t get me wrong, there’s a lot going for this movie. The opening sequence is great, Ursula Andress as Honey Ryder, the really nice twists and turns thoroughout. Plus a really decent trailer (below), well, for 1961/62 standards anyway.