A couple of weeks ago, I had the opportunity to chat with writer/producer Damon Lindelof about Tomorrowland for Moviefone. You can read the entire interview here, here are just a couple of highlights from that chat, including how they got George Clooney to do a summer movie (he hasn’t starred in one since Ocean’s Thirteen), his favorite scene, and how Tomorrowland is kind of like Hogwarts.

Considering George doesn’t do summer movies, why do you think he was interested in the role of Frank?

I think George totally embodies everything that the movie is about, and he’s had great range in that he’s both directed and performed intense dramatic roles but also comedic roles, and you kind of need someone who can do both of those things. More importantly, George as a guy, both in the movies he chooses to make as an actor and George Clooney the individual, is very idealistic. He identifies wrongs in society and says, “I’m not going to look at Darfur and say, ‘Boy what a mess.’ I’m going to look at Darfur and I’m going to get satellites to beam images of the tragedy and then goes to meet with world leaders to try and work on a resolution.” So if we’re going to George and ask him to be in a summer movie, which he doesn’t do, there needs to be some kind of merit to it. 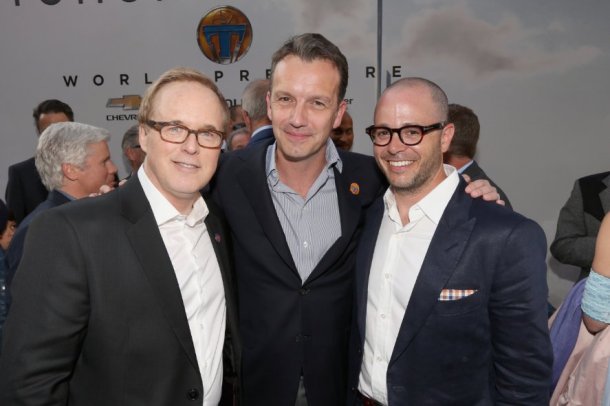 I understand that during your chat with Disney’s president of production Sean Bailey, that’s when you started looking inside the park for ideas of what your next movie would be?

Right, so I would be looking inside the parks for great ideas and I said, “If there was a movie called ‘Tomorrowland,’ I don’t know what it’s about, but I’d go and see that.” He said, “What would it be?” and I said, “For me, the jumping off point would be a ‘Close Encounters’ approach, which is, somebody sees something they weren’t supposed to see and they come to feel this means something and need to know more about it and go in pursuit of it.” Obviously, “Close Encounters” is a one-of-a-kind, iconic film, but there’s no bad guy. The U.S. government is sort of a pseudo-bad guy, but with our movie, you probably need there to be a bad guy. I said to him “‘Tomorrowland’ is Hogwarts, and the magicians don’t want you to find it, but in this case, instead of magicians, you’ve got geniuses.”

There are some really big scenes in this movie that stand out. Which scene do you think movie fans absolutely must see on the big screen, particularly in IMAX?

I think Casey’s extended pin sequence. She rides her bike out and touches the pin and takes this four minute ride through Tomorrowland that Brad designed as one contiguous shot without any cuts. I feel like that, in itself, is sort of worth the price of admission because we’re putting this on an IMAX screen, we’re not using IMAX cameras to shoot it, so we should probably justify it. As a fanboy and a moviegoer, I’d probably say, “Ok, I’m glad I saw it.”