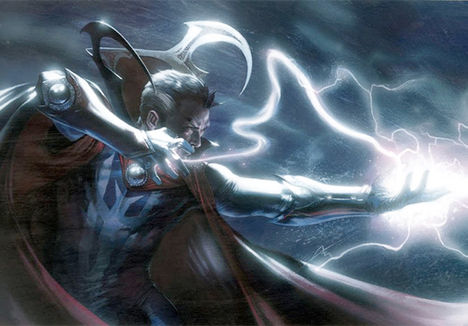 As Marvel begins to make the transition between their Phase Two and Three slate of films, it appears the studio is beginning to conjure up a director for their Doctor Strange movie.

THR reports that the studio has met with four filmmakers in particular. Scroll down to find out who they are and sample some of their prior work.

Out of the four filmmakers that have met with Marvel execs, Levine appears to have the resume to make the jump to a comic book blockbuster. Levine directed the zombie romance Warm Bodies as well as the cancer comedy 50/50 starring Joseph Gordon-Levitt and Seth Rogen. Both films proved to be box office successes.

If Marvel isn’t going with a proven success like Levine, they might think in-Mouse, er, in-house. Andrews co-wrote and co-directed Pixar’s Brave. While the film received mixed reaction, it still went on to become a global hit and launched a new Disney princess in Merida.

The great thing about Marvel is they’re open to considering international talent as much as they are domestic and in-house stars. Arcel wrote and directed the 2013 best foreign film Oscar-nomintaed film A Royal Affair. Two hours of Danish history isn’t something most people are going to rush out to watch, but Arcel crafted a mesmerizing and entertaining film in Affair.

At first glance, this might be a bit of a gamble. Admittedly, Israelite’s time-traveling Welcome to Yesterday has not hit theaters yet (it arrives in Europe this fall), but his experience crafting a story immersed in the sci-fi genre would be a plus in telling the story of the Sorcerer Supreme.

Directing isn’t the only thing Marvel is looking to cement when it comes to Doctor Strange. Jon Aibel and Glenn Berger, the writers of the Kung Fu Panda movies are currently in contention to write the script for the Marvel movie.

So now that you’ve had a look at who is in contention for the directing job, which of these filmmakers do you like? Is there another director you’d like Marvel to meet with?

Doctor Strange does not have a release date yet, but given Marvel Studios president Kevin Feige’s love of the character, we could see it in theaters as soon as 2016.