Beauty and the Beast executive producer Kelly Souders opens up in a round-table discussion about the rest of the first season, the shift away from the procedural element and did they move “The Kiss” up after the internet’s reaction to the Alex subplot?

Kelly Souders: This is my first Wondercon. It’s pretty exciting.

Q: What’s your experience been so far?

KS: It’s been good. Mainly I’ve been in the hotel though. I just got here not too long ago, but it’s kind of fun. When I went to Comic-Con, it was massively crazy, this is the die hards here. It’s awesome.

Q: What are you going to do if you see any cosplayers from Beauty and the Beast?

KS: (laughs) I don’t know. I’ll have to think about that.

Q: I was getting a lot of Twitter questions about the Gabe character. When are we going to learn more about him?

KS: You’re gonna learn a lot. It’s going to a start unraveling more and more, but in the last couple episodes of the season in particular. He becomes… you’ll understand a new place that he has in the show.

Q: Are we going to go back and investigate Cat’s mother’s death anymore?

KS: That’s definitely going to come into play and how she learns more about her mother is kind of interesting and more will unravel up until the finale.

Q: Is there a cliffhanger planned? 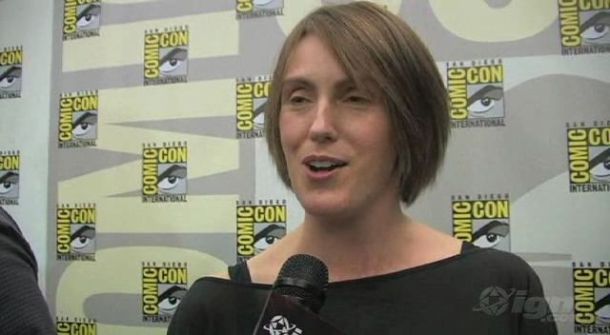 Q: It feels like there’s deeper levels of mythology that we haven’t gotten the chance to explore yet. In the second season, is that where we would see more of that?

KS: As you leave this season, it tees you up for some bigger revelations to come down the road in season two, so I don’t think you’ll be disappointed with it.

Q: What was your original goal with this series. Was there a master plan of a certain number of seasons?

KS: As the season goes along, there’s a lot of things that we pull out that fit into upcoming seasons. Like, we’ll have one story arc and we’ll pull it back and go, ‘It fits more in line with what we have planned for season two or season three. There’s a lot of different avenues that we’ve been having fun exploring so a lot of it is going back and picking out which stories can work well with each other. There’s an incredible writing staff.

Q: So there’s no master plan as in, ‘We have to get to this benchmark in the story at a certain point’?

KS: Not specifically as far as timelines, but there’s definitely tentpoles and big moments that all of us have been planning. I can’t go like, “Let’s make this happen in episode 8,” but there are tentpoles that will be coming down the pipeline.

Q: Do you have like a big whiteboard with different scenarios written out on it?

KS: Yea, the walls in the writers room are scary. (laughs)

Q: Was it always the plan to have them kiss a third of the way into the first season?

KS: You know what, I will admit, no. We had been thinking the kiss, but we actually ended up pulling it forward a little bit more and I think in a way it allowed us to open up some of the story for the back half so going into it, we work really closely with CBS Studios and CW Netowrk and really there’s a big discussion with them and working with thema s partners and we all kind of agreed together, ‘Let’s just move it a little closer up cuz it’ll allow us to blow out some things in the back.

KS: No. I can’t say that because we end up shooting ahead of when they air. We writer them, then re-write them, then they shoot them then they come back and we go thru post and get in the visual effects, so there’s a lot of things and quite a bit of time passes… although we did read all those comments. (laughs)

Q: What sparked the shift away from the procedural element of the show?

KS: Yea, her being a cop is such a critical part of her character, but it was great to have a few of the episodes up top where you were with her as this mystery was unfolding. I think all of us get footage in and you start looking at scenes and things and you start seeing Cat and Vincent together and you see them on the run from Muirfield or whatever it is, all that stuff is compelling so it was nice to be able to shift a little bit. After people kind of knew the characters, we started weaving into their worlds a little differently.

Q: After working with Kristin on Smallville, what were some of the things that you really wanted to give her a chance to do with this show?

KS: The episode that their going to air today (Heart of Darkness), was kind of a nice moment for me after having watched footage of her for so long. She is really fantastic, she’s really phenomenal, especially in this episode, I think because there’s a lot of moments where she can’t say the thing that she’s thinking and as an actor, it’s really hard to portray those inner dialogues without saying one word because the people you’re talking to are the people you’re trying to hide everything from. So there’s a few moments. One moment, that won’t be seen today, that you have to wait and watch on air (laughs), but I was watching it and thinking, ‘She’s become this incredible, multi-layered actor. She never disappoints you. You write something and it always comes out as you hope it would and when I was in the editing room for this particular episode, I really got these moments of being able to see it from a much more objective view and felt moved a little bit more, I don’t know why. It was a really great moment because after watching this episode, I felt like there was nothing that I could throw at her that she won’t nail and elevate. She was great on Smallville, but what I think is great about this show for her is that, because it is about her, you see a lot more of the sides of her life than you do when it’s a supporting character who’s only on screen for 12 minutes each episode.

Q: Are you pulling from her experiences, like with martial arts and gymnastics?

KS: Her stunt work is great. She really puts herself into it, but I think also you just get to know the character in a way and know what’s going to be emotionally compelling for her and so it makes it fun to write. When you know the moments when she’s going to glom onto and enjoy.

Q: When you directed an episode of Smallville, you didn’t get to direct Kristin. Is there any chance that you’ll direct an episode of Beauty and the Beast?

KS: I loved [directing the episode of Smallville], they were such an amazing crew and cast. But it’s hard to leave the writing offices for that long, cuz you just disappear, you disappear for three, three and a half weeks. So it’s really hard to find the month where you don’t need to be doing anything else , but I don’t know, maybe someday.

Q: How often do you go on set?

KS: I’ve up four times over the year, we’ve all rotated, between myself and [producers] Jenn, Shari and Bryan. It’s difficult though. When one person is gone to go from down here [L.A.] to up there [Toronto], you really feel it. Things just kind of slow down.

13 thoughts on “WonderCon: ‘Beauty and the Beast’ Interview with Executive Producer Kelly Souders”