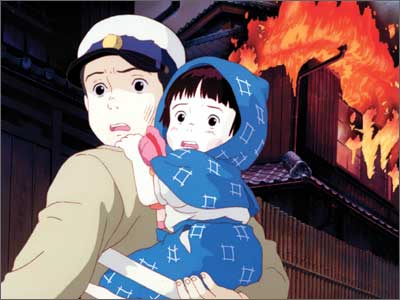 The sadness begins. Cue the waterworks.

Phew, OK, I made it through the entire movie. So sad. Grave of Fireflies as I imagined and predicted it would, has totally bummed me out. But I guess that’s what makes it such a great movie.

As I mentioned in yesterday’s post, I very rarely cry watching movies. I can count on one hand the number of movies that have made me cry – Cinema Paradiso, About Schmidt for some weird reason, Old Yeller (although I try to fight it) and I may or may not have cried during Denzel Washington’s whipping scene in Glory, I can’t quite remember. Oh and the end of The Notebook because if Rachel McAdams forgot who I was, it would drive me to tears. 😦

And then add Fireflies to the list. The first time I watched it, man, that was emotional punishment. This second time around, though it had been years since I had last seen it, I thought I would be OK…. Not. I’ll even identify the very moment the eyes start to get misty. At the three minute mark, that’s right, only three freakin’ minutes into the movie. But that’s only because I already know what’s going to happen, which you would think would make it easier to watch. OK, I need to get the good vibes going again. Thank goodness I have Honey, I Shrunk the Kids tomorrow.