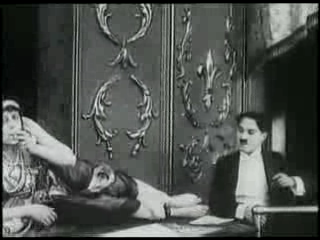 Charlie Chaplin with The Snake Charmer, one of the many acts in "A Night at the Shows"

Charlie Chaplin’s A Night in the Shows is a tale of two halves. The first half is incredibly tedious. The second half, however, is quite entertaining. Chaplin, who wrote and directed this silent comedy, plays two roles, The Pest (who can’t seem to find his seat in the beginning and ultimately ends up sitting off-stage) and Mr. Rowdy, (who’s hijinx with the firehouse are quite hilarious) with wonderful comedic timing. He exhibits his mastery of physical comedy nicely in this movie.

I’m not really going to mention the first twelve or so minute before the show, as it’s certainly nothing memorable and honestly, worth fast forwarding through. I break my back-to-back Chaplin movies with tomorrow’s 20,000 Leagues Under the Sea, to conclude my first week on this journey!