Oh, and by all means stay to the very end for an awesome end credits scene!

1. While the movie is being sold as a comedy superhero movie, it’s really about the relationship between Hiro and Baymax. “The movie is really about the two of them coming together,” director Chris Williams said. “We decided early on that the central relationship would be between Hiro and Baymax as Hiro struggled to deal with [a family tragedy]. There’s this emotional depth and resonance that is pretty far beyond what people might expect.”

2. “When I was a kid, I loved Marvel comics. While working on Winnie the Pooh, I asked John Lasseter if I could explore the Marvel world for inspiration for my next film,” director Don Hall said. “I was encouraged to explore the Marvel vaults and one of the projects I found was called Big Hero 6. I’d never heard of it, but I liked the title and its Japanese influences – it just sounded cool.”

3. Though not a movie under the Marvel Studios umbrella, they were still supportive during the production process of the film. “[They] attended every screening, offering notes. They’ve never given us any guidelines other than to make a great movie. We’re all fans of Marvel with great admiration for their style of action and adventure, so we wanted to make sure that was deeply ingrained in our storytelling, along with the desire to make a film with the heart and humor audiences expect from Disney animation,” Hall said.

4. Part of the production involved researching the robotics world to find Baymax. Hall spent some time with researcher at Carnegie Mellon University. “We had some really great conversations about robots in pop culture,” Hall said. “I learned that they were actually researching soft robotics, including this vinyl arm that as inflatable and non-threatening. It could do simple things like brush somebody’s teeth, but the possibilities were endless.”

5. Hall and several members of the production team also visited a number of East Coast universities, including Harvard and MIT. The environments inspired San Fransokyo Tech labs in the movie.

6. According to head of story Joe Mateo, Hiro’s personality was also informed by research. “We met young people and asked them about their interests – what they did for fun.”

7. Hiro’s love of technology was inspired in part by Japanese researchers, Hall says. “They were all influenced by Japanese pop culture and the robots they saw in animation. Their robots are different from Western robots. In Japan, robots are the key to a hopeful future. It’s about making the world a better place.”

8. Hiro’s show-stopping microbots invention was also developed through research. “We did some research at UCLA on their work with nanobots – like molecular-level robots,” Hall said. “Then we went to Carnegie Mellon University and MIT and met some people doing research on tiny robots. Our microbots evolved and while there’s nothing out there doing the things that Hiro presents in the movie – the technology is out there.”

9. For the film’s finale, the filmmakers consulted a theoretical physicist at CalTech.

10. The filmmaking team also did some serious research into grief, particularly how loss impacts someone Hiro’s age. Several members of the story team spent three hours with clinical psychologist Michelle Bilotta Smith. “I work with people who have experienced severe trauma and grief,” she said. “They wanted to know what a depressed kid would look like. What would his room look like? What would he be doing?” Smith says adolescents process loss differently than adults.

12. Denizen was a proprietary system created within Walt Disney Animation Studios that revolutionized how artists could create and animate crowds. “In order to create and maintain those characters we needed to find a way to generate them procedurally so they could evolve as the show evolved and be created on the fly when needed,” character rigging supervisor John Kahwaty said.

13. According to Kahwaty, Denizen “ingests a small number of characters that define the style for the show and analyzes and compares them. It then provides a character designer a way to see all the pieces we create up from and blend them together to create a final model, rig, cloth rig, hair rig, and look that can be immediately inserted into a shot, animated and rendered.”

15. Walt Disney Animation Studios employees were encouraged to model themselves as background characters. As a result, 200 employees make cameos within the crowd shots in the film.

17. The elaborate design of San Fransoyko with its big crowds and ample detail would not have been possible without a new innovation called Hyperion. Walt Disney Animation Studios’ Brent Burley, Sean Jenkins and Chuck Tappan led a team of developers to create the rendering tool. “We were struggling with two things,” Burley said. “There was ever-increasing complexity running up against memory limits and there was a desire to have richer, more complex lighting in a more efficient way – lightning was pretty labor intensive.”

18. Hyperion allows artists who specialize in lighting to focus on the art versus dealing with massive amounts of data. According to Walt Disney Animation Studios’ chief technology officer Andy Hendrickson, Hyperion comes closer to mimicking what happens in the world around us.

20. The software for Hyperion has been in the works for two years.

22. Japanese infomercials influenced the design of Baymax. “If they’re selling a rice cooker, for example, it always seems to emphasize the cute aspect, yet hide the technology,” Kim said. “We wanted the same feeling for Baymax, because it made him less threatening in appearance.”

23. Baymax’s vinyl design presented a challenge in lighting him. “We did tests with vinyl beach balls, then we set up the same test in Hyperion. The way the light bounced around the vinyl looked exactly like the reference we shot,” director of cinematography-lighting Adolph Lusinsky said.

24. When it came time to make Baymax move, head of animation Zach Parrish and his team looked at a number of references. “We looked at real robots, movie robots, plus cute cuddly things like babies, babies with full diapers, koala bears,” he said. “We eventually landed on baby penguins because they have similar body proportions – long torsos and short legs – and they don’t use their arms-wings when they walk. Robots wouldn’t move anything that doesn’t have to move. Penguins also have a curious way of moving their heads – they telescope their necks, which gives a lot of personality.”

25. When it came time to design Gogo Tamago (voiced by Jamie Chung) Hall says, “We looked at bicycle messangers as inspiration for her character.”

26. Artists also looked at actors like John Wayne, Clint Eastwood, Gary Cooper and other cowboys to study cool, emotionally reserved habits. “Even before the hero transformation, she’s tough,” Chung said. “She’s strong. She can totally hold her own.”

27. Head of animation Zach Parrish says they also looked at speed skaters to inform Gogo’s body type and movement. “She has a lot of attitude. She’s going to pick the quickest way to any given point and stop there, and with a deadpan look, she’ll blow and pop [her bubblegum],” Parrish said. “That gesture alone says, ‘I’m too cool for you.'”

28. At one time, Wasabi (voiced by Damon Wayans Jr.) was a very Zen character. “Neurotic Wasabi was so much more fun to watch,” animation supervisor Nathan Englehardt said. When filmmakers tweaked his personality, they initially decided the neatnik wouldn’t be a fan of the dreadlock hairstyle and gave him a haircut. That look didn’t last as it turns out everyone was just too attached to his cool locks.

29. Genesis Rodriguez, who voices Honey Lemon, was once on a robotics team.

30. Filmmakers traveled up the California coast to visit San Francisco. “We spent three days just driving around the city, hitting the Golden Gate Bridge, Coit Tower, Market Street and Japantown,” Hall said. “We also spent some time on Angel Island.” The filmmakers viewed San Francisco from the ground, logging many miles by foot and also by air with breathtaking helicopter rides. “We literally wanted our setting to geographically be San Francisco,” Hall said. 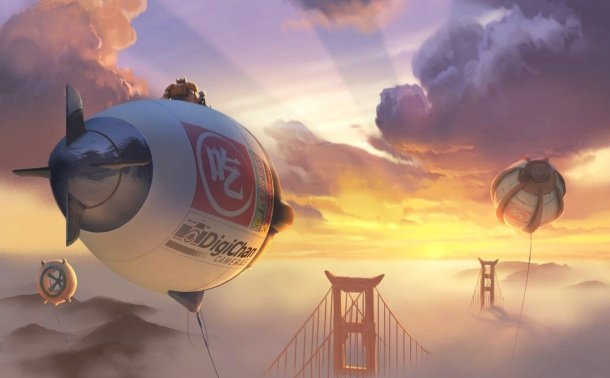 31. In case you’re wondering what those large blimp-like structures that are floating above the clouds are, they’re wind turbines. San Fransokyo is powered by wind energy.

32. Production designer Paul Felix looked to Tokyo for its aesthetic elements. “We adopted Tokyo’s visual styling of the architecture,” he said. “We were inspired by the urban design in Tokyo – the giant public works and the density, and even how some of the streets are organized: there are minimal sidewalks in some areas, for example. We wanted to make sure that we captured those ideas so the audience would feel that this could be in an Asian country.”

33. A graphic designer was hired more than two years ago to create the massive amount of designs needed to fill the vast city.

34. San Fransokyo Tech features Stanford mission architecture crossed with Japanese architecture. “We looked at campuses like Caltech where there is an original campus styled in the early 20th century and over the decades, it proliferates into other design styles,” Felix said.