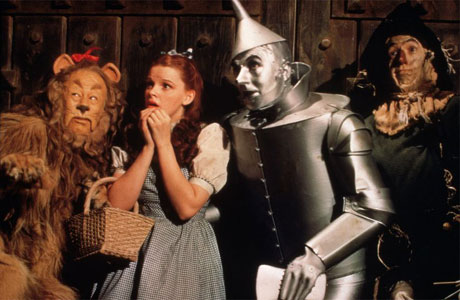 The foursome just found out that there's three re-makes coming in 2011 and 2012.

I freakin’ love this movie. I love the sepia colored beginning and the switch to vibrant color part-way thru. Back when I first saw The Wizard of Oz, about a couple decades or so ago, I had a bit of a crush on Dorothy (Judy Garland) and the flying monkeys freaked the hell out of me. But now that I’m much, much older, I get to be like an old person and reminisce at the songs and the characters and the acting.

Earlier today, I watched Scott Pilgrim vs. The World. While that movie is epic epicness (and Ellen Wong is epic cuteness) it got me to thinking about how Oz and Pilgrim could be very similar movies. Here’s how we make a Scott Pilgrim version of The Wizard of Oz….

After each level, there is a Bonus Stage – A Guitar Hero-type scoring system for “Somewhere over the Rainbow” “Ding Dong the Witch is Dead” “Off to See the Wizard, the Wonderful Wizard of Oz” “If I Only Had A Brain”…etc. but just the vocal part.

Battle 1 – Opening showdown between The Wicked Witch of the West vs. Dorothy… Battle for the Ruby Slippers!!… Result – Dorothy wins with a 12-hit combo using the giant lollipop she got from the munchkins of the Lollipop Guild. The Witch flees but vows… vengeance!!!

Battle 3 – Tinman vs. Chev Chelios from Crank… Battle for a Heart!! .. Result – Chelios kicks, punches and shoots the Tinman but to no effect. Chelios then takes a car battery and tries to electrocute Tinman, who then punches Chev in the heart. He flies back, stunned. Meanwhile, Tinman takes his giant ax and, well, yea. Winner, Tinman, but the heart is damaged from the elctro-shock so he joins Dorothy and Scarecrow.

No opening battle for the Lion. He’s too much of a pussy. *rimshot* 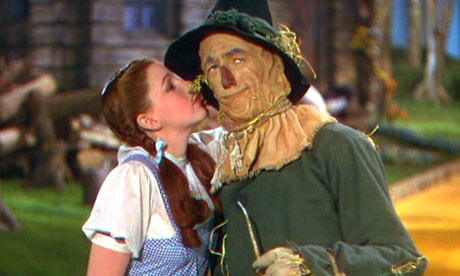 Lucky Scarecrow gets a kiss from Dorothy.

Level 4 – Multi-player mode – Freaky Flying Monkeys vs. Tinman, Dorothy, Lion and Scarecrow… Result – The Lion hides cuz he’s a big hairy coward, the Scarecrow gets torn to shreds (again), the Tinman rusts as the monkeys piss on his legs and Dorothy gets kidnapped and taken to the Wicked Bitch, I mean, Witch of the West. With Toto, who’s probably wondering what the hell they slipped in his dog food.

Hidden Bonus Stage – Multi-player level – Tinman, Lion, Scarecrow and since Dorothy is captured, ummm, I don’t know, Super Mario. The task – Dodge the rocks that the flying monkeys and special guest Donkey Kong are throwing down from above. And there’s a secret 1-Up mushroom near the top.

Add a few sound and visual effects and you’ve got a contemporary version of Oz… although for my money, the original is untouchable. Of course, Hollywood doesn’t think so. That why there’s two freakin’ Oz-related movies coming out in 2011 and one in 2012. Surrender Dorothy by Drew Barrymore and Oz, The Great and Powerful starring Robert Downey, Jr. in 2011 and Dorothy of Oz in 2012. *sigh*