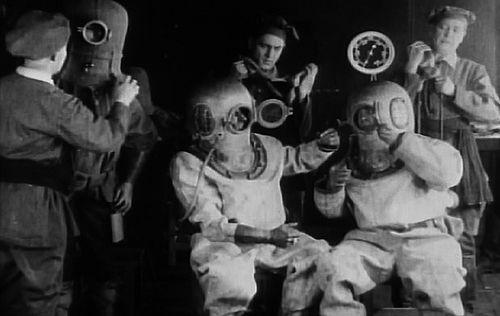 Captain Nemo prepares to lead the crew out to battle sharks in 20,000 Leagues Under the Sea.

I must say the first thirty minutes of 20,000 Leagues Under the Sea are really entertaining. It starts out as an action adventure movie but then after about a half hour, it morphs into a romance/marine documentary type of movie.

The marine documentary part comes in the form of some of a group of shipwreck victims peering out the window of Captain Nemo’s submarine window. I’m sure back in 1916, there had never been such extensive footage of deep sea marine life, so it must have been fascinating. Now, it’s just boring. At several points in the movie, there is dialogue written that points out the beauty of the ocean and the marine life. Captain Nemo even takes the men out on a pearl hunting trip which quickly morphs into a never-ending shark hunt.

The underwater footage really took me out of the movie. It just slowed waaaay down and despite the excellent music, I just couldn’t get back into it. I will say though, that after a week, this is still one of the better movies I’ve seen.